We are your dedicated policing team who work with the community and partner agencies to address concerns raised by you.

Every three months priorities are set based on what the local community tell us are their concerns. You can raise your concerns by attending one of the meetings listed below or by contacting us at anytime using the contact details provided below.

Residents are welcome to come to any of the locations stated above. If you need to speak with one of the team before the dates above please contact us via Wiltshire Police non-emergency telephone number 101 or our email address swindonnorthnpt@wiltshire.pnn.police.uk 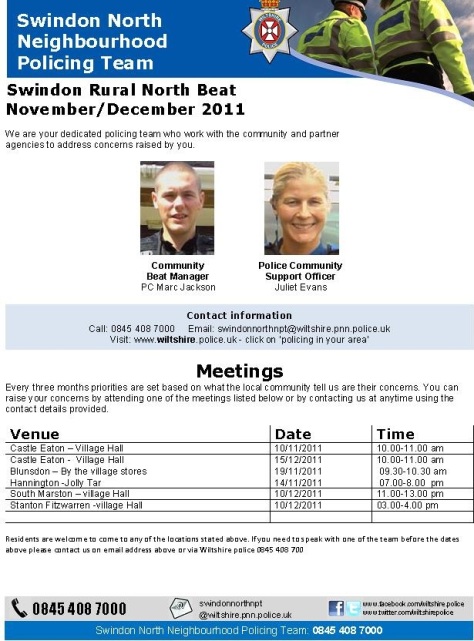 FLYTIPPING, speeding and thefts from farms are the priorities for the new police team covering the villages and hamlets north of Swindon.

PC Marc Jackson, the community beat manager for rural north, and local PCSO Juliet Evans are calling on residents and farmers to report incidents to help them reduce crime.

PC Jackson, who recently qualified as a wildlife officer, will also work with other agencies to tackle poaching, theft of birds, illegal trapping and other offences against animals.

“Possibly in the past they haven’t been particularly served well by the police and other agencies.

“I am quite keen to break down some of those barriers, to become an integral part of the communities, to encourage people to talk to us, so we can tackle crime.”

PC Jackson, 33, who grew up in Highworth, was the community beat manager at Highworth neighbourhood police team for three years before moving this month to the rural north team.

Initially the team will focus on targeting speeding on Broad Bush, South Marston and flytipping at about three to four ‘grotspots’ across the wider area.

They will continue Operation Deepak, launched this autumn, which will see officers team up with farmers and gamekeepers to deter thieves from taking farm property, such as diesel, machinery and scrap metal.

As a wildlife officer, PC Jackson will also work alongside DEFRA and the Environment Agency to enforce rural legislation, including the Wildlife and Countryside Act and the Hunting Act.

PC Jackson said: “A lot of the farmers we know are getting problems but they aren’t reporting it because they are just putting it down to ‘Oh well, it’s happened, we will move on’.

“But we want them to tell us it’s happening so we can do something about it. We are happy to help.”

Over the next month, the team will put flyers in village halls, shops, pubs and other community facilities to introduce themselves to the community and inform them of the next police drop-in sessions. To contact the team, call 0845 408 7000 or email Marc.Jackson@wiltshire.pnn.police.uk.

I would like to introduce myself as the new Police Community Support Office (PCSO) for the area. My name is Juliet Evans and I have moved across from the Lower Stratton, Covingham and Nythe area. I am also joined by PC Marc Jackson who has been the Beat Manager for Highworth for the last three year.

I have been a PCSO for almost two years  and it has been my wish to be a Rural based PCSO. Marc has been a Police Officer for seven years. Both of us are very keen on rural life and issues. We look forward to meeting the community and will shortly be announcing dates of the local Police Surgery.

There have been reports of two young males asking for scrap metal especially copper and lead in the village. Please be vigilant and inform the Police of any incidents or suspicious occurrences. We can be contacted either on 0845 408 7000 or on the Police website for the area or by emailing swindonruralnorth@wiltshire.police.uk.