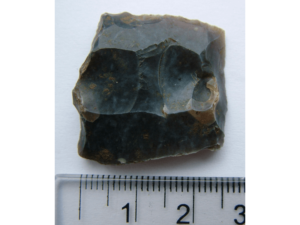 A flint from a flintlock gun, found in a field to the north of the village centre. Dated to approximately 1740 +/- 80 years.

The Southbys appear to have purchased the manor from the Hungerfords in 1661 and the Southby and Duke families were prominent in the village from 1670 until 1800. The Church Records reveal more than fifty baptisms, marriages and burials for the families. John Southby was followed by Anthony Southby and then Henry Southby and his wife, Elizabeth, who had ten children from 1689 to 1706; Robert and Jane Duke; and Anthony Southby (jnr) and his wife Anne who had ten children from 1719 to 1737. Both Southbys and Dukes have memorials in the Church.

National Archive documents held at the Wilts and Swindon History Centre include numerous Southby family deeds from 1661 to 1767, together with another 100 18th Century deeds for the village, but the content and legibility is not clear!

Richard Southby who lived in Highworth appears to have sold the manor (“lately occupied by John Curtis”) to Francis Warneford of Sevenhampton in 1767 but it is difficult to explain why, 6 years later, the 1773 Andrews and Dury map of Wiltshire indicates the Southbys still to own the manor house. The 1667 deed from Southby to Warneford refers to a number of field names including Home Close, Home Ground, Didpitt, Sheep Close and Bare Furlong. “Bare Furlong” is probably the “Berefurlong” referred to in the Hungerford Cartulary as being part of the vast East Field in the 13th Century. Leaden Hill also referred to in deeds at this time was “Ledenhull” in 1365. Francis Warneford appears to have sold or leased the Manor to Mary Dyke.

The open expanses of arable fields and common marsh and meadow which had supported the Medieval villagers were gradually enclosed from 1400 onwards forming the field pattern which we see today. Enclosure was used to contain livestock but as demand for cheese and butter rose dairy farming became more intensive and new farmsteads began to appear. Most of the farmhouses which currently exist were built in the 1700’s (see Swindon Council’s Listing Descriptions) and by 1770 there were as many as fifteen farms. The new farms concentrated on cows and cheese (not milk, which could not be kept), many of the farms had a purpose built “cheese room” and North Wiltshire cheese was as famous as Cheddar.
The booming cheese industry and its transportation to new markets further afield following the construction of the canal and then the railway saw land bought in the village by wealthy local and national businessmen: the Frekes from Hannington, the Hippisleys and the Ashfordby-Trenchards from Stanton Fitzwarren, the Warnefords from Sevenhampton, Walter James and the Earls of Carnarvon and Radnor (deeds in the National Archive).

The National Archive also holds bills for a dairy farm (1762-72) rented by Thomas Titcombe from the Hippisley Estate, a 1795 lease of Rowborough Farm (which now had a farmhouse) and for the agricultural workers 30 deeds (1729-1906) for the Red House and 4 adjoining cottages (Fairthorne).

The 1801 Census records the village population as 252. Common family names in the Church Records include Green, Smith, Whiteman, Wells, Jeffries, Bridges, Wilkins, Edwards, Titcomb, Sellwood and the farming families of Horton, Litten, Kempster, Pineger, Stone and Morse. Baptisms from 1813 also listed the occupations of the fathers, mainly labourers but also farmers, dairymen, fellmongers, lock-keepers, carpenters, shoemakers, carriers, blacksmiths and one soldier, William Kemble. William Kemble survived Napoleon, returned to life as a labourer, married Mary Spackman in 1813, suffered the deaths of his infant sons in 1814 and 1823 and left the village.

The Marriage register indicates occupation or place of origin from 1700 onwards, most newlyweds being of this parish (“tp”) and or the surrounding villages. Burials from 1813 include the age of the deceased, several living into their eighties and one, John Mundy of the durable Mundy family, aged 92 at his death in 1825. Was he a descendant of Elizabeth Munday, the first recorded baptism in 1539?.

It is hoped that enthusiasts will contribute further information regarding the canal(1800) and the railway (1830); the National Archive holds documents regarding both.
The 1840 Tithe Map and Apportionments List gives a comprehensive picture of the village in 1840.